I have no voice, a raw throat, and sore cheeks (from smiling and talking, pervert, get your mind out of the gutter). I couldn’t be happier.

This past Friday-Saturday was Romancing the Capital, a romance-centred reading convention hosted in part by Eve Langlais. I say hosted “in part” but I mean she organized the vast majority of what went on, and frankly, she was amazing, from her big rack (of antlers from her shifter stories) to her tinfoil hat (not metaphorically, a real tinfoil hat).

I was nervous – I was, it turned out, the only guy author present (and one of maybe four or five guys at all, though the husband contingent was very friendly). It didn’t take long for me to do a mental head-slap, though, and realize being the gay guy in a room full of romantic women isn’t uncharted waters for me. Hello, High School? Yeah.

Seriously, though, everyone was incredible. I started the day with a panel on Historical Romance with Claire Delacroix, Reece Butler, Sharon Page, and Tina Christopher (who has the best goggles ever, by the way), and was immediately put at ease. This was obviously going to be a conference for the readers to ask questions, laugh, and to share information and help out new authors. There was laughter almost from step one, and the sheer volume of enthusiasm was contagious. 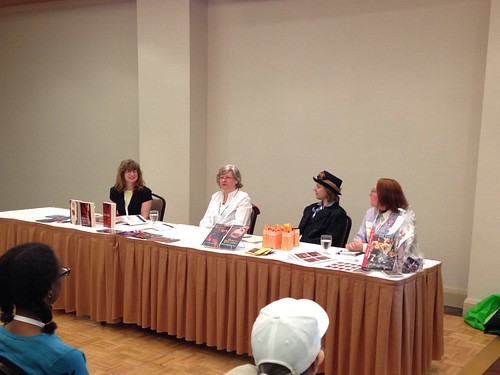 From there, I was up with ‘The Many Shades of Love: LGBT Romance’ alongside Elizabeth Lister and Kayleigh Malcolm. To say we had a blast would be understating. The questions were great, the audience really wanted to know more about LGBT romance, and I spoke about the publishers I’ve worked the most with, Bold Strokes Books and Lethe Press and extolled the virtues of the short story and anthology worlds. It was actually fascinating, too, to get the perspective of women readers reading m/m fiction, and to hear Liz and Kayleigh talk about their styles and books. I also learned a new term for menage fiction subcategories: when the guys play together as well as with the lady, I shall henceforth refer to that as “crossed swords” menage. Ha!

Since I was behind the table, I didn’t get a shot of our talk, but Kayleigh’s husband got this action shot of us laughing – probably at something dirty we’d just said. 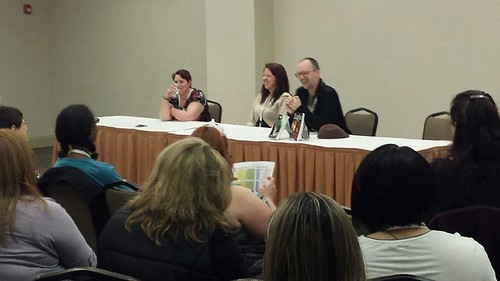 Thanks to my blood sugar, I had to nip out for lunch at that point, and Liz and I had a great time decompressing and nibbling. When I went back to the conference, I caught the fantastic duo of Kali Willows and Milly Taiden, who talked Interracial Romance. It was a really solid discussion, and it was fascinating to hear the feedback they got from readers (both positive and negative) on mixing up the various interracial options – as Milly put it at one point to applause, “folks, interracial isn’t just black-and-white.”

Also, Milly has the best shifter-ears. 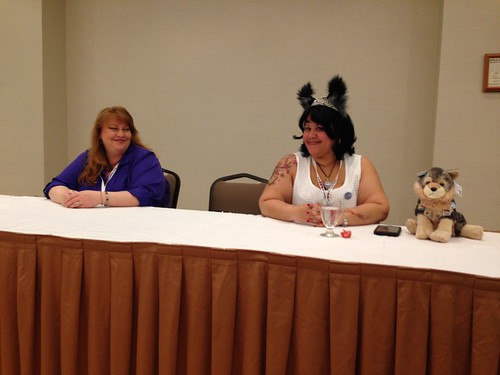 From there I went to the sci-fi discussion panel, and I didn’t get a shot because I was third-row back and surrounded by readers (this panel was packed!) Here, mostly we laughed out loud at the antics of Eve Langlais, S.E. Smith, Viola Grace, and Tianna Xander. Seriously, so much laughter. Not-as-neutered-as-he-appears aliens with no nipples, fresh panties for potential alien invasion, and tinfoil hats – it all got covered (or uncovered) with glee. The audience Q&A was hysterical, but was still informative. Questions about environment impacting culture, character development when the sky is literally not the limit, and more. Great panel.

Then I had my “Intimate Chat” time for a half-hour, and was pleased to see that despite being opposite Opal Carew every single time I was scheduled somewhere, I drew in a great group who had some wonderful questions for me. I hadn’t planned a specific topic or discussion, and asked them what they’d like me to talk about or what they wanted to come away with, and we didn’t stop for a moment during the half-hour. There was a lot of talk about the need for happy gay stories, which made me smile, and some interesting Q&A on the m/m-vs-gay categorization (where I called ‘BS’ on the whole ‘women can’t write good gay stories’ idiocy.)

Even though there was a party – a dress up Mad Hatter Dinner party, no less – I went home. My poor husband had been riotously sick the day before and was my ride home today, and he certainly wasn’t feeling much better. While I waited for him outside, I had a great chat with some great ladies from the U.S., and I have to say, left grinning.

On Saturday, I woke up feeling like crap. I realized that perhaps bragging that my husband was ill but I’d managed to avoid his bug the day before was perhaps hubris, and so I was a bit slow to start the day. I missed the 9:00a panels, but that let me breathe and relax enough to still be somewhat bright-eyed and energetic for my 10:00a discussion/workshop: “Same Sex, Same Romance?”

The first thing I did was turn the rows of chairs into a circle. I know, I know, I’m a big hippy. Everybody hug.

My goal with the group was to walk through the basic premises of romance, and then take a second walk-through with the notion of what should, could, would, or wouldn’t change if the story involved LGBT characters instead of cis-gendered heterosexual ones. We had a fantastic discussion, especially around the notion of historical romance, and there were some great “lightbulb” moments of brainstorming as people brought their pain points on works-in-progress to the group and we hashed out some potential solutions.

Even better? After the talk ended, I spent another fifteen or twenty minutes talking with people from the discussion group more specifically about LGBT publishing (again, mostly about the publishers I’d worked with) and short fiction and the value of editors (I think I said ‘listen to your editor’ so many times during these two days it had become my catch-phrase). This chatting meant I missed the final slot for presentations, but I wouldn’t have missed it for the world. I went to lunch with two lovely women and we had a great time (I’m embarrassed to admit that cold medication brain fog has made their names slip, which is awful, but I hope to see them again next year).

Then there was the book fair and book signing. 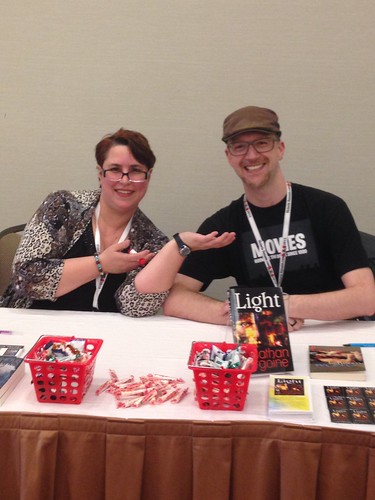 Liz and I were stunned at the sheer volume of people that came through that door. I’ve been at book fairs before. Heck, I’ve run them, in my day-job days at the bookstore. It was incredible. And most impressively, when Liz (who writes some pretty darn smexy BDSM gay erotica) and myself explained the books we wrote, if a reader wasn’t into our specific schtick, it was never a big deal. This crowd was happy to let their tastes run, but there was no “ew!” factor for things they didn’t themselves enjoy. It was open and welcoming and fantastic. We had a great time, and sold a tonne of books. 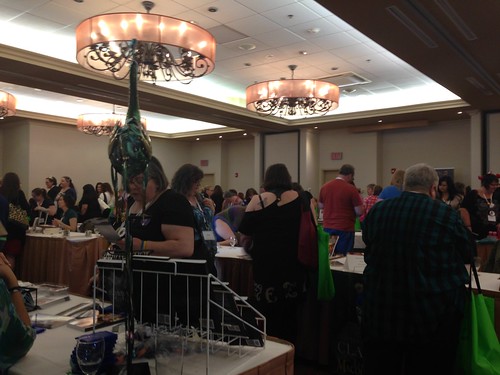 Also, I wanted to do one last shout-out to Kadian Tracey, who was at the table beside Liz and I, and who was at my workshop, and who was – frankly – awesomesauce on a stick. She and her buddy were so much fun, and I totally want to be her GBF. 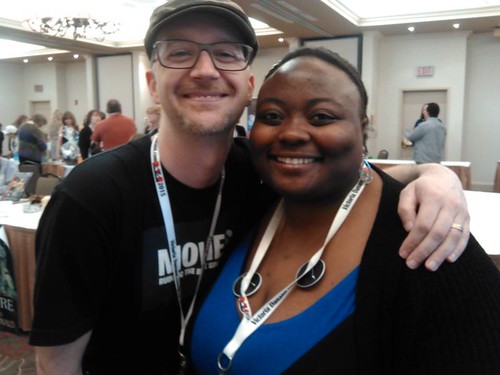 And on that note – I’m gonna go lie down.

Can’t wait for next year!