I never thought I’d write a novel. I was very much a lover of short fiction (I still am, by the way), and thought the closest I’d get to a novel was a series of linked short fiction tales that followed in similar settings or revisited characters. I was happy about that, and was planning to continue writing that way right up until Greg Herren asked me for a novel and raised his eyebrow when I said I didn’t write novels.

And Light was born. I was officially a novelist. More, I was lucky enough that people liked Light, and the reviews were mostly positive. I even got to be a finalist for a Lammy in my the category I loved the most: Science Fiction & Fantasy (and Horror). It was pretty much the greatest “first novel” experience I could have had.

Authors talk about “the Sophomore Slump” when it comes time for a second novel. Now, I had quite honestly intended to go back to my little world of short fiction, but then there was a story I’d been working on that wouldn’t work. It was the same “wouldn’t work” that had happened to Keiran Quinn’s story – it was too much story to be a short story.

And it involved the Triad.

I’ve gotten the most feedback from Light – emails, book reviews, face-to-face comments – and that isn’t surprising. The world of short fiction is smaller, people are less vocal about it, and – despite my thinking it’s a completely different animal – people often consider it “less” than novels. But in my short fiction, I get pretty consistent feedback about a particular group of characters.

It started with Luc, a French Canadian vampire who introduced my version of paranormal urban Ottawa in a short story called “Three,” that appeared in Blood Sacraments. The conceit of my paranormal world was based on the number three: it took three vampires to form a group that ended their vulnerability to any other vampires out there with a group of three or more. Their group was called a “coterie.” Luc was alone, which meant he was in danger. On full moons, the vampires gather, share blood, and reinforce their bonds – that meant when there was a full moon, Luc had three days into which he had to try to cram as much as he could. He heads out to a bar, and bumps into a young man he greatly desires to feed from – and also bumps into a demon, Anders, who is in much the same boat as he is: alone, and therefore vulnerable. They don’t get along, but they decide to work together to take home the young man who seems so very immune to their charms.

The idea of the Triad came from the three wives of Dracula in Bram Stoker’s book. They seemed like an odd and misplaced notion to me, without explanation, and just sort of “tacked on.” In various rambling musings on the book, I decided somewhere that they were needed in some way. That idea percolated, and when the call came for Blood Shadows, I made it a paranormal law: three vampires create a coterie, three demons form a clan, three wizards become a coven. You can have more, but you cannot have less than three people.

That story got some great reactions – and one very visceral bad review among the otherwise positive – and people not only liked Luc, but they really enjoyed Anders the demon. My fellow writers, especially, liked the hairy, foul-mouthed incubus.

So, when a call came for a gay angel-themed erotica collection, Wings, I moved from Luc’s point of view to that of Anders. Anders the demon – now teamed up with Luc the vampire and Curtis the wizard – had formed a group of three that was different and unique, and in this story, “Intercession,” he learned just how different it made him – he had an opportunity, delivered to him by an angel, to achieve something he had never considered possible: humanity.

Of course, asking a demon not to give into temptation? Seems unlikely, no?

I got some great feedback on the story, and the first message that asked if I was thinking of writing more Triad stories. I absolutely was. After using Luc’s voice and Anders’s voice, it felt only right to try a story from Curtis’s point of view, so I started to write one, even though I had no home for it. As luck would have it, Richard Labonte had a call for Erotica Exotica, where he’d collected many paranormal and “odd” erotica stories he’d received that he’d really loved but didn’t fit previous anthology themes, and wanted a few more to round out the collection. “Possession” was my turn at bat with Curtis, and I had a great time building on the other two tales and giving the wizards their time in the spotlight.

The next time I got a message about the Triad guys, it was someone asking if I had plans to write a novel about them.

Wasn’t going to happen, I thought. I write short stories. In fact, I wrote another one – again from Anders’s point of view (he’s definitely the fan favourite, by the way) for Raising Hell, a collection of gay demonic erotica. And again, I got asked if I was planning a book for these guys.

Fast-forward to that short story that wouldn’t work because it was too long, and…

Well, I’m sure you know where this is going.

I’ve been working on the Triad novel since last September, and I’m well on my way. One of the best parts of the process of writing a novel is when you get to spy cover art ideas – this happens way before the book is released, by the way, and is often a wonderful “carrot” in the sense that the arrival of cover art is another shot-in-the-arm to the creative process.

I just got my cover, and I love it.

With no further ado, here’s that book about the Triad guys… 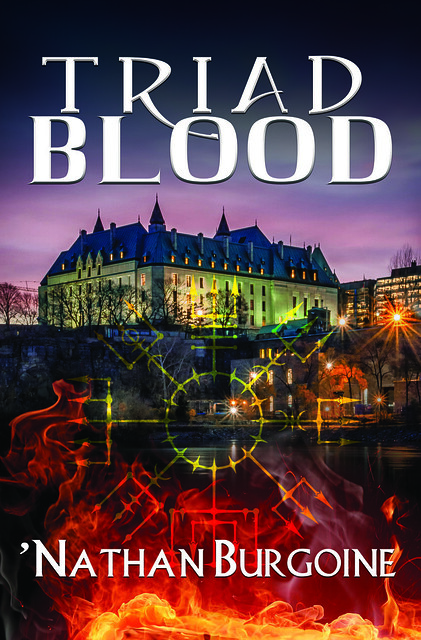 So. What do you think?