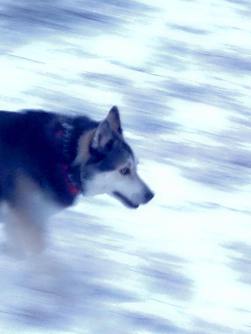 To the point where my writing buddy (a.k.a. Coach the Husky) actually turned around and pulled me back to the house yesterday because he was too cold. The husky was too cold. As my friend Greg would say: madness.

On the plus side, this stopped me from heading to Bulk Barn to get a bag (or three) of candy. See, I got my edits back for Triad Blood, and it turns out that whilst I edit, I also snack. I think I was vaguely aware of that before the vanishing of the third of a bag of chocolate covered raisins and quarter bag of crisps, but now I know it for sure. Also, I’m pretty much out of junk food in the house, and I’ve got about a half-day left of work ahead of me so… We’ll see how that goes.

What was really cute were the many people who suggested I pick up mini carrots, celery, and some low-fat dip. Y’all are sweet, but it’s cold, and the last thing I want is cold vegetables. I want sugar and fat. But do feel good about telling me to do the healthy thing. You’re good people for it.

Maybe I’ll make a one-cup brownie when I finish today.

And, a reminder from last week: the Bold Strokes Books website relaunched a short while ago, and it’s so pretty! There continues to be a store-wide 10% off sale on current available titles, so it’s the perfect time to indulge (that includes Light being 10% off). Among the various anthologies in which I have stories being on sale, Bold Strokes Books has some even deeper discounted: the paperbacks of quite a few are $4.99 to begin with (!) and a further 10% off. To whit:

I’ve paused on Triad Soul until I get Triad Blood edits finished. I’ll have to do some catch-up post-editing, but that’s fine. The turnaround window for edits is always narrow, so I knew this was likely to occur. Also, editing means brownies. So, no contest.

Huge thank you to everyone who shared, commented, posted, and/or “liked” my Q&A with Tom Cardamone last Sunday. It was received well, and is the first in a long stream of them coming your way. I enjoy the format, and for those authors who are waiting for their questions, I’ll be sending most of them over the next week or so—I’ve got more than thirty of you interested, which is fantastic, but it means I’ve got quite a bit of prep-work ahead of me.

I still haven’t submitted anything for January yet, which is making me twitch. I’ve got eleven days left.

Open Calls I Know About (and find tempting)…

Don’t forget to check the Lambda Literary site for more calls, as well as the Queer Sci-Fi calls for submission page (always a trove!)