Getting back on track is a process, but it starts with that whole “first step” thing. Yesterday, I sat down and organized the first of two major projects ahead of me this year, a novel. Today I’ll be doing the same with a second project. Getting organized is the “On Your Marks” and “Get Set” of the writing race to me, and thereafter the “Go” becomes much, much easier.

I’m not a plotter in a grander sense, though. I do a very rough outline, gather my thoughts, and I’m a non-linear writer in my process. But that framework makes a project “real” enough that I gain forward momentum, even when I write chapter seven and then double back to chapter two before writing the epilogue.

Listen, I admire linear writers. I’m just not one of them.

That’ll be my “update on the projects” portion of this first Writing Wednesday. Next week I’ll pop in with the word counts/goals/etc., assuming I have contracts in hand. Otherwise, it’ll stay vague until there are solids.

As this is the first Writing Wednesday of 2017, I should probably also note upcoming stuff that is solid, though, so here we go.

You knew this one already, but Triad Soul is up for pre-order through Bold Strokes Books right this very moment, and will be out June 2017, alongside some freaking awesome other titles (I’m personally super-stoked for Fiona Riley‘s Unlikely Match).

A brief word about pre-ordering: I had a conversation recently with a reader who asked ‘how’s the best way to get your book that helps you the most?’ Now, before I answer, I wanted to state, clearly: however you (legally) get the book is a good thing. The library, borrowed from a friend… Basically, if you’re not torrenting or pirating the book, I’m happy. That said, the truth is this: the absolute most helpful way for the author is to get the book (a) directly from the publisher, and (b) pre-order it. The why is simple: generally speaking, the author makes a better cut on direct sales, as there are zero middle-men between the publisher and the sale; especially if you’re ordering an e-book. It also shows the publisher there is interest in the book before it even releases, which might give them a nudge to pay more attention to how widely they market the book, shout about the book, and whether or not the author gets picked up for another contract. 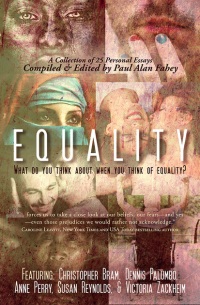 A rare non-fiction from me, I have a piece called “Limit” in the upcoming Equality: What Do You Think About When You Think of Equality? This is, obviously, a piece close to my heart, and the collection as a whole, which I’ve been reading since my author copy arrived, has been illuminating from a bunch of different angles. There are some big names in there, too, so I get to be all chuffed about the company I’m keeping.

Equality is currently set to release this month, so you can hop on that one pretty darn quickly, if you’re at all interested. The personal essays inside range from the humorous to the angry to the bittersweet to the joyful and celebratory. It’s as varied as the people in it, and that’s the strength of the collection as a whole.

And hey, who doesn’t want to think about equality these days, what with what’s going on to the south, in the east, and even in my birth country, huh?

Chicken Soup for the Soul: Random Acts of Kindness

I’m going to be the first person to say I didn’t believe this would happen. I’m a queer writer who generally sticks to queer topics (see above), but last year I was maintaining a “submit something once per month” challenge and there was a month where I couldn’t find an anthology to which I had something appropriate, the stuff I was writing wasn’t flowing, and then I saw that Chicken Soup was looking for random acts of kindness and I remembered one of my favourite things that had ever happened in the bookstore, period, and thought, ‘Don’t self-reject.’

So, I wrote it, submitted it, crossed off my “submit something once a month” goal for the month and moved on.

And it got accepted. I’m still surprised, but come February 2017, Chicken Soup for the Soul: Random Acts of Kindness will be live and you can visit the bookstore and pick up a copy about the best holiday memory I have from working retail Christmas in a bookstore.

The amusement here is also added from remembering how often I’d have to shelve the Chicken Soup books at the store, and how they inevitably got out of order and the new title that arrived was always in a location of the alphabetical order that was the least convenient for moving all the titles to make room. Now I’m going to be part of the problem.

The other thing I generally do on these Writing Wednesday updates is list off all the various open calls for submission I’ve found and/or am trying to write for. If you know of any others, by all means do drop them in the comments and I’ll add them to the list. If this is helpful for people other than myself, it’s even better.

2 thoughts on “Writing Wednesday – On Your Marks, Get Set…”