I didn’t want to have a discussion today, and I couldn’t help myself from expressing a bit of exhausted frustration about the discussion… and then ended up having the discussion. Again. My own fault.

But, it occurred to me I’ve had this conversation enough that it might be worth putting my thoughts down in once place. I talk about ownvoice a lot, but from this particular angle, I’m not sure I’ve discussed it here, so here we go.

Today’s attempt at a not-discussion happened when a fellow author noted there was one one gay author on a blog shared which was listed as a kind of a beginner’s guide to reading Gay Fantasy. Now, reaction to this was actually pretty soft (I’ve seen much, much worse) and generally open, and the discussion more-or-less went okay thereafter.

But the response that brings the exhaustion every time did show up: “Does that mean as a straight woman I should only write straight women?” and then, as a chaser, “People write about serial killers without being real serial killers. Authors do research.”

That’s not what’s being said. What’s being brought to the attention is that, once again, a marginalized voice is left outside, rather than being in the position of existing and being heard.

Okay, so let’s break things down a bit.

I don’t think it’s over-the-top to at least note when a list of titles about a marginalized group doesn’t hit even a half-way point with content created by those implicitly in the group.

This issue manifests in a lot of ways that silence voices, and can be as internal as it is external. This also isn’t restricted to the identities of the authors, either. I’ve lost count of the number of “LGBTQ Pride Readings Lists!” that have zero T or B or Q content, maybe one or two L titles, and then the rest is solid G all the way, baby. There’s a fairly easy fix there: Don’t call it what it isn’t.

Ditto how much an author chooses to boost the signal of other authors. If the books read and recommended by an author never (or only rarely) seem to include a gay man, but an author writes gay male characters and suggests lots of other non-gay-male authors far, far more often? Those are choices.

There’s a great phrase I see repeated in many activist circles: “nothing about us without us.” It doesn’t mean exclusion of those not in the group, it means inclusion of those within the group, to make sure the voice of the group isn’t lost among the (likely good) intent of those outside it.

I’ve seen this discussion play out so many times, including recently in autism groups, where so many top-ten or recommended reading lists so often don’t actually include any (or many) authors or experts in question from within the group itself.

So I Can Only Write Straight Women, Then?

Okay, this is such a loaded topic, so to start: I’m not saying only queer men should write queer men. I need that to be clear. There are brilliant non-queer-men writing queer-men stories out there. I love seeing them get the recognition of a tale well told.

That said, do I think it’s important to make sure that the voice of a marginalized people is heard? Of course I do. There’s always danger the authenticity of the voice will suffer if the majority of stories about a living, breathing people aren’t written by them or with them.

To bring this to a specifically M/M place, recently on an online chat the question was posed: What does M/M mean to you? In other words, when someone says M/M, what do you think of?

These were my answers:

None of these are necessarily bad things per sé, just what I’ve come to expect as a reader when reading books labeled “m/m.” And they don’t ring authentic to my queer life. But if books that follow these trends are the only books appearing on a list labeled “gay,” and there’s not a single book on the list where, for example, the queer men have other gay and lesbian and bi and trans friends?

That list is missing how many gay people exist. Something I know to expect to find in gay men’s #ownvoice books. All my queer characters have queer friends. As a queer person? That’s my reality.

But you’d never know it—or learn it—from some lists out there.

I’m Not a Vampire Either, But I Write Those 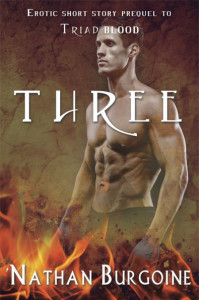 Fair enough. So do I. But vampires aren’t a real, living and breathing marginalized group of people. Queer people are. So if you write a queer character (and, yes, even a queer vampire), and you are not using your voice, and you get something wrong, you need to learn. Be open to criticism. And own it.

Also? Non-real things like Vampires can definitely do harm, too. If your good army of elves are all light skinned, sparkly, and have blond hair and the evil army of orcs are all black skinned and ugly? Take a second to think about that. This carries across to shifters, to aliens, to dragons, to whatever you create. If you create an alien race in a far-flung future where same-sex couples are the norm for that culture, and you have your space-faring humans rattled by that, you’ve written a future where queerness hasn’t progressed pretty much at all. Or, conversely, if you write a future where “queer doesn’t matter” but the only couples you ever actually see on page are straight or gay men, then what, exactly, happened to the lesbians?

Writing stuff that doesn’t exist doesn’t get an author off the hook for how they write (or don’t write) living, breathing cultures. I’m not a serial killer either, but if all the serial killers I write are bisexual, and none of the other characters are bisexual? I still do harm.

An author still needs to do research.

Of course authors research. That’s part of the job. Writing a police procedural? You’re likely going to check in with some cops, right? And when an author screws something up, they’ll often make a little note about it on a blog, or joke about it at a Con, and then moving forward they’ll try not to make the same mistake again. Which is great.

And, for some reason, seems not to happen anywhere as smoothly when we’re talking about the representation of queer people.

Now, there’s tonnes of information out there from queer #ownvoices. I try to do that myself, right here in blogs like this. Research is more or less accessible, even without being particularly intrusive (but, hey, I do love respectful questions that don’t assume I’m at the beck and call of an author, and love answering them). An author has a decent chance of writing something with queer characters that doesn’t foul out if they do the homework, sure.

If a living, breathing group cries foul? That’s when it’s time to stop and listen. Because we’re fallible as writers. We’ll screw up. We’ll do some harm without intending to. And that sucks, because harm wasn’t intended, but harm is still done, and the lack of intent comes second to the harm.

It’s my go-to example, but: Gay-For-You. There’s a strong, loud voice from bi and pan readers decrying Gay-For-You plots that erase them. After doing even a modicum of research, you will know that. Thereafter? You can’t unknow that. If you continue to write Gay-For-You stories with that kind of erasure? Now you’re choosing to willfully do some harm.

Ditto dead-naming trans characters (especially in the damn blurb), burying your gays, referring to HIV status as clean/dirty, etc, etc, etc. We are real people, and whether or not an author likes it, if they choose to write in our voice, they are representing us.

Just on Gay-For-You I have seen people fly completely off the handle saying it doesn’t matter, that the m/m Gay-For-You books aren’t for bi people, and that bi and pan people shouldn’t be upset, they’re over-reacting, that they just shouldn’t read them, and on and on.

When I was a kid, my “first time seeing me” reading moment was a gay character in a story. He died. And it was presented very much as an “of course he died, he was gay.” The class all nodded their heads. I sat there trying not to react, learning that I was probably going to die because I was gay.

People outside a marginalized group don’t get to decide what harms those within it.

That’s totally up to each individual. I’m not trying to tell anyone what to do so much as I’m trying to explain why my eyebrow creeps up when lists of books about a group of people don’t include any authors from that group. It translates across the board, of course: I don’t think anyone would think it unfair to criticize a list of “the best women detectives” books that had not a single woman author on the list, or “the best black fiction” that didn’t include more than one black author. It seems like basic stuff to me, like inviting five white men to sit on a panel to discuss the wage gap.

It would never fly. It shouldn’t. So when it happens, in list form or otherwise, this is why there’s pushback. Why the discussion happens.

But maybe I should try to turn this into some sort of advice?

If an author is writing a character that isn’t their voice as the primary voice from a living breathing culture? They’re taking a risk. As long as they know that? By all means, go where the muse leads, but prepare for feedback and be prepared to be graceful in the eye of unexpected feedback especially. And, I honestly think the author should stop and really ask themselves why they want to write that character.

For me? My experience never seeing myself in fiction is why I choose to write what I write, and why I try to focus on reading and boosting #ownvoices. I absolutely work to write diversity into my worlds, yes, but I also don’t generally write a main voice that’s not at least somewhat mine.

Again: that’s my choice. No one else has to do the same. But I’d rather boost an ace #ownvoice than write an ace main character. Ace supporting characters? I’m absolutely writing them. But I’d never try to be the next ace voice. Because I’m not ace. The same way I try to boost and suggest awesome lesbian and bi and trans authors out there writing amazing books, but also include awesome lesbian and bi and trans characters in my stories. I can write a world that supports all my queer allies without taking the mic from their hands.

2 thoughts on “Voice, Lists, Existing, and Being Heard”