The wonderful Elizabeth Lister‘s Friday Flash Fics challenge continues. Today’s picture suited perfectly for a moment that takes place in Ian’s life shortly after the events of one of the stories in my upcoming collection of short fiction, Of Echoes Born, so I decided to flesh it out a bit for the challenge. I have a feeling you’ll see more of the characters from that collection as these challenges continue. 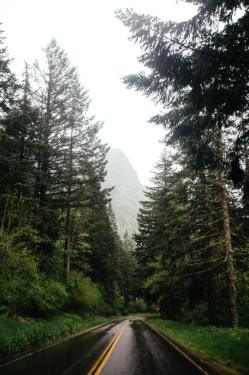 Ian woke early. Three hours ahead as far as time zones were concerned, he had all the joy of watching the sunrise and none of the grogginess. As far as first days on vacation went, it didn’t completely suck. He had a whole week on his own ahead of him.

He eyed the other side of the bed. Empty.

Okay, he had the whole of forever on his own ahead of him.

That hadn’t been the plan. But this morning? He didn’t mind.

That Ian had a lot to look forward to at the end of the week didn’t hurt. Friends. Big decisions. Huge ones.

The kettle whistled. He made a pot of tea, grabbed a hoodie, and settled on the deck of the cabin, waiting. The pale light in the distance gave way over two cups of tea, living up to the website’s promises. The strait blazed with reds, oranges, golds and, eventually, yellows.

He smiled to himself, thinking of colours, and pushed.

There wasn’t much here, but his gaze caught on the edge of the deck, near the steps, and the world fractured where he looked.

A couple appeared. Much later in the day, and unless he was mistaken, a warmer time of year. He couldn’t quite pinpoint the when, but the two were in their seventies or so, holding hands as they stepped down, the man pausing at each step for the woman to catch up.

Ian rose, holding on to the sight. He followed them down gravel path, and then along the road itself. They were in no hurry. Twice the man pointed at something. The woman would look, often smiling at him after, nodding, and touching his arm.

A bird? A flower?

They held hands again, walking on.

Ian followed, sliding his hands into his hoodie pocket, feeling the rising sun start to nibble some of the chill from the air. A light rain began to fall—not touching the older couple—and Ian pulled up his hood.

It was getting easier. He shouldn’t be surprised, of course. Not that long ago, it had been second nature to look the way he could look. The colours had never gone, the auras around people, those he couldn’t shut out, but this other thing, this way to see into another when…

The couple paused again. Ian almost glanced where the man pointed, but there’d be nothing there. Not in the now.

He’d come a long way down the road with them. A sign ahead noted a curve.

Ian stood still, watching the couple once they started walking again, and only letting go of the vision once they slipped around the bend, a little piece of a sunny when.

The fractures in the air mended.

Even he couldn’t see around corners.

It made him smile.

Ian turned, and started back for the cabin. Breakfast. And then…

Then whatever happened after would happen.

One thought on “Friday Flash Fiction – The Next When”