Friday Flash Fics this week was something super sci-fi, and it made me think of a novella series I’ve had on the back-back-back-back burner for if I ever try to write something harder SF. 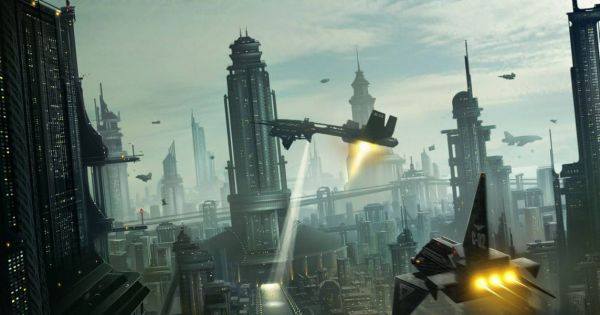 The walk to the shuttle is the last dangerous thing. If any part of this plan has gone wrong, this is when it will happen. Every decision I’ve made in the last few years comes down to this moment.

Have I trusted even one wrong person?

Ahead of me, the spotlights from the transport shuttle light the walkway. I take a deep breath of twilight air, and I wonder if this is the last free breath I will take.

I look at Manny. He offers up a smile, and I can see the humour in his eyes.

“I am,” I say. The kindnesses he has done me are beyond listing.

We embrace as the shuttle lands, and I surprise him with a kiss. A few others see us, some smile.

And then it’s time to make the walk.

“It’ll be over before we know it. See you soon,” he says. It’s meant for the watchers.

It is the longest short walk of my life. I almost panic when I see the short triangular shape of a security ship coming toward the same platform, but I enter the transport. My ID is scanned, and confirmed. The attendant raises his eyebrows when he sees my connections. Earth to Luna, Luna to Mars, and then… “All the way to Enceladus?”

The security ship is still there. I try not to stare at it, right up to the moment when the transport shuttle lifts off. On the walkway, I can see the tiny figure of Manny. He even waves.

The reds and oranges and yellows of Saturn are as gorgeous as I’ve always imagined. I still can’t believe I’m here. Away from Earth and the slowly closing fist of the forming world government. In the small office, I’m still looking at one of the large screens—not really a window, but so high in resolution it might as well be—when a familiar voice nudges me from my reverie.

Cassandra. The older woman smiles when I turn, and I hug her as tight as I dare. I hadn’t even heard her come in.

“Thank you,” I say. My voice cracks, and I have to clear my throat.

She just shakes her head. “We got you out. Now the real adventure begins.”

“Between you and me, I’d be happy for some non-adventure.”

She laughs. “No trouble?”

I shake my head. “The hardest part was getting out of the US. The fake ID held up in Canada, the marriage got me citizenship once the year waiting period was up, I took the equivalency exams while I waited, got my credentials…” I shook my head. “Your contact at the registration facility was incredible. The whole railroad.” My voice is breaking again.

“Between Canada and Norway, we can get Gentech out. And once we’re out of legal range of the Eds and Reds…” She smiled. “Well. Here you are.”

“Here I am. So. What can I do?” I’m eager to begin my free life. Not wondering if someone is going to find out my genetic code was manipulated. Not less-than-human in most of the countries of the world.

Her smile grows. “I can’t wait to show you. There’s a reason we wanted you specifically, beyond the…” She waves her hand beside her temple.

I grin. “I’m a little rusty. What with the hiding for my own safety.”

She reaches into her pocket and pulls out a red ball, tossing it at my face.

I catch it with my mind. It stops an inch away, hovering in mid air.

I reach out and pluck the ball from the air.

I eye the screen. The image display has been divided into four images. On each, a multi-coloured marble, streams of data. “Which one?”

Cassandra pointed. “This one.”

“We’re almost ready for the first cohort. A few things missing. Oh, and a team lead. Who just arrived.” She eyed me, then winked.

“Do they know?” I ask. I’m not even sure who I mean, exactly. Earth? Mars? Luna? The corporations?

I think about that. Ten groups of people on one-way trips to a new world. Or, well, nine. The tenth cohort would include a Helios system of its own, making it possible for others to return.

Helios worked. I’d figured out a way to throw a ship faster than light, letting the gravity of a far star to serve as an exit point. Tiny probes were one thing, launched through the prototype Helios, and sending back even tinier message-in-a-bottle results through their own one-shot Helios, but a full-size gate here, almost ready to send colonists…

I stare at the screen. One marble in particular.