This week’s shot made me think of the gym/spa in my fictional version of the Village. Fiona from Handmade Holidays works there, as does Aiden from “Heart” (which will be one of the reprints in Of Echoes Born). Today we meet a co-worker of theirs, Rodrigo, and a new client, Morgan, who will make his appearance in Saving the Date, coming soon.

Oh, and here’s the image which is definitely inspiring. Thank you, Friday Flash Fics. 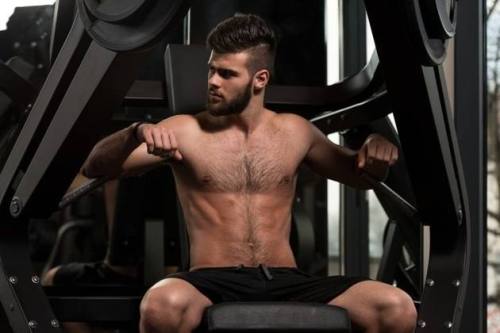 “Hey, since you’re not really doing anything, could I take this machine?”

Rodrigo frowned, and glanced over to where he’d overheard the conversation. Normally, he had earbuds in and couldn’t hear anything else going on at Body Positive—it was the only way he got his workout in without distraction before a shift—but yesterday Cinza had noticed one of the earbuds hanging out of his bag, and after a successful and no doubt thrilling hunt, had delivered the chewed-up piece of plastic to the bottom of his bed, where he’d found it this morning.

He loved his cat. She’d stared at him, so very proud of her accomplishment, that he couldn’t even get angry.

He needed to buy new earbuds.

But right now, his attention was drawn by the powerlifter, a regular, who’d just rudely dismissed someone else. That was an atmosphere the gym tried to avoid, and it wasn’t that particular man’s first infraction. Body Positive was born to be a force for health and empowerment.

Rodrigo checked around, but both Fiona and Aiden were with other clients. Technically, Rodrigo didn’t start his shift for another hour, but…

The powerlifter was exactly the kind of gym member Rodrigo liked the least: huge, loud, and—given his chicken legs—obsessed with his upper body and pretty much nothing else. As the big man started to grunt loudly, the pin in the machine set to some large amount of weight, Rodrigo paid him no more attention beyond irritation, then noticed the other man had already taken a few steps away. A ginger, freckled and lean, he carried a few pieces of paper, and his face was burning red. He looked like a complete newbie, and he was wearing track pants and a light—but long-sleeved—cotton shirt.

The redhead sighed, then turned away from the machines.

Before Rodrigo knew what he was doing, he got up and walked over.

The guy with the papers jumped at his voice, turning. He eyed him, and Rodrigo tried not to be too offended when the look wasn’t particularly friendly. After all, the last guy who’d spoken had pretty much insulted him, right?

“I’m fine.” The flush on the guy’s face made that a lie. He looked somewhere between pissed off and embarrassed.

“That guy was an ass. I’m sorry. That’s not what this place is about. Did you need a hand with any of the machines?”

Now the newbie frowned at him.

“I work here,” Rodrigo said. “Though I’m not working yet. I was just getting in some exercise before I started. I’m Rodrigo. One of the trainers.” He offered his hand.

The guy shook Rodrigo’s hand quickly, and physically took a step back. Huh. That was…something. Not that he expected everyone to swoon at him, but Rodrigo was used to at least a little positive attention when he was shirtless. Maybe the redhead didn’t like beards?

Finally, the guy spoke. “I’m Morgan. I’m thinking maybe I should come back when it’s not so busy.”

“If you want, I can have him give you back the spot.”

Rodrigo frowned. Morgan suddenly seemed familiar. “Is this your first time at this gym?”

Rodrigo took a breath. “I’m sorry. If I’m bothering you—”

“No,” Morgan said. “No, it’s me. I’m…” He blew out a breath. “It’s possible this isn’t the right place for me. There’s some stuff I’m supposed to do. Exercises. I thought I could do it on my lunch break, and…” He sighed. “But I guess a lot of people come to the gym on their lunch breaks. To do, y’know, actual workouts.”

That got Rodrigo’s attention again. He glanced at the sheets Morgan carried. “May I see?”

Morgan hesitated, but eventually he handed them over.

At a glance, it was obvious the exercises had nothing to do with building muscle, but were instead about recovering range of motion and joint strength. The notes in the margins, the diagrams, and the repeated reminder beside many of the exercises not to add any weights to the machines in question were perfectly clear to Rodrigo’s eyes.

Morgan nodded. “My arm, shoulder, and wrist. Among other stuff.”

Rodrigo looked at him again and the familiarity clicked. He had seen Morgan before. He’d had longer hair, though. And a much more carefree smile.

Morgan flinched, obviously catching the moment Rodrigo realized who he was. He was probably used to being recognized in the Village. After all, there’d been a lot of coverage.

At least the guy who’d bashed him had gone to jail.

“Let me get Fiona for you,” Rodrigo said, careful to keep his voice even and polite. “She’s our physiotherapist.”

“I’ll be right back.” Rodrigo paused. “Just so you know? This is the place for you. This is entirely why we’re here. Whatever we can do to make this easier, and you more comfortable? We’ll do.”