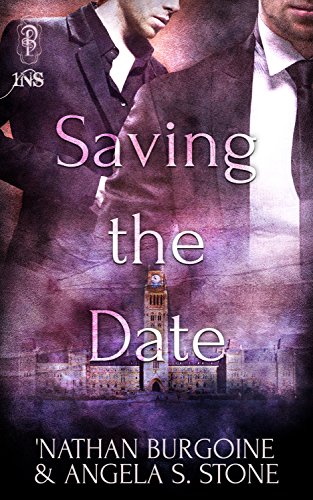 As of this morning, Saving the Date has gone live for pre-order, so I thought I’d take some time to chat about this upcoming novella, and maybe whet your interest.

Saving the Date was born thanks to Romancing the Capital, where I met Angela S. Stone, a fellow author. We were going to be on a panel together, and I always try to read something the other authors have written before a panel, and I found her 1Night Stand story, Unsportsmanlike Conduct. I hadn’t heard of 1Night Stand before, but it’s a many-authored series about a matching agency (the aforementioned 1Night Stand) run by the mysterious Madame Eve, who has an uncanny knack of matching people perfectly for a night (and often, longer thereafter, even if they go in expecting just one night.) They’re fun, and short, and sexy, and when Angela suggested we could co-author one, it seemed like a really neat idea, and I started pondering for a character.

We split the book into Point-of-View. She’d write Character A, I’d write Character B, and before long we both had our ideas in place: her character, Zach, would be a divorced and closeted bi fellow; I was writing Morgan, a surviving (and thriving) victim of violence who’d reached the point where he was ready for some intimacy (though maybe not much more than that). From there, the ideas grew, deciding on complications took a while, and we went forward. Spin this up two years or so, and here we are with Saving the Date.

Oh, and for those who read Handmade Holidays? There’s also a cameo or two to look forward to.