Today’s Friday Flash Fics image came from desperately wanting the snow and ice to go away. It snowed again yesterday. But, at least we can travel somewhere warm in our heads, no? 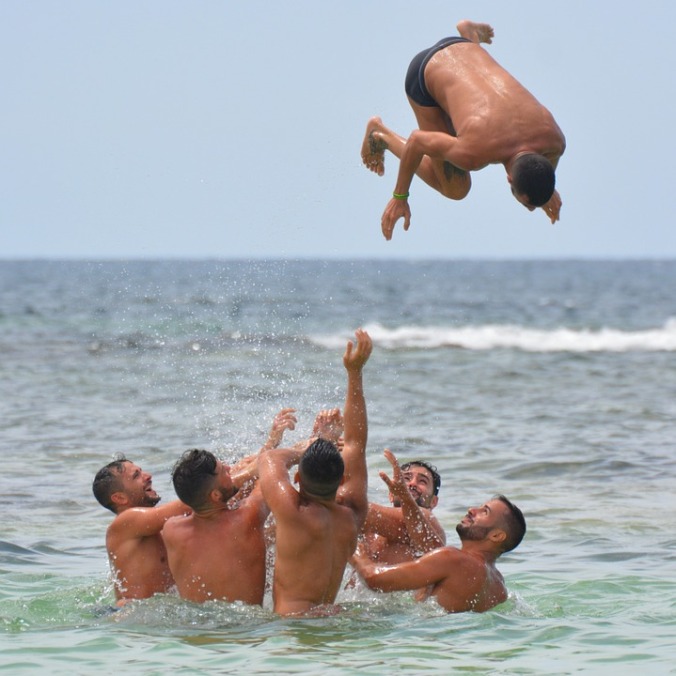 After the weeks of snow, and ice—not to mention his only view of those being from a hospital bed—the glory of the heat, the brightness of the sun, and the beautiful blue-green of the ocean made Yves feel alive again.

And he was. Alive. Again.

Not that he’d been dead. Just… well. It had come close. And what did you do after something like that?

The responsible thing would have been to get back to work. Ease into it, of course, since he was still technically still recovering, but…

But when he’d ridden the wheelchair out of the hospital, and then stepped into a whirl of snow and ice and cold, he’d called an uber, and gone straight to the travel agency in the mall.

Now, here he was.

He lay on the beach, only opening his eyes now and then, feeling the heat of the air sink into him and finally—finally—feeling warm.

Then something smacked the side of his head, hard enough to sting.

Yves yelped, and sat up, putting his hand against his temple and blinking away tears. More shocked than hurt, he glanced down.

A frisbee lay beside him. Or, he supposed, a disc. Some of his friends payed Ultimate. They got annoyed when he called it a frisbee.

A second later, shade fell over him, and he looked up to see two very attractive men.

Dark haired, dark eyed, skin a lovely bronze, and both sporting what had to be daily maintained short beards, they looked local, and the string of words that came out of their mouth was certainly accented and in a language Yves didn’t know. He’d brought a book with him, but they were going so fast he didn’t catch a single one.

The two men glanced at each other.

“Oh Canada!” the second said, and if he was off-key, the giant smile made up for it. Also the chest and arms and abs.

They both blinked, still smiling, but shaking their heads. They didn’t know it.

One of the men turned and called over his shoulder, another rapid string of language, and then there were more of them.

They weren’t identical, but honestly, it was a close thing. It was like one of those charity calendars he bought had come to life. The ones with the beautiful shirtless men holding dogs for charity. Or was it cats this year? Whatever. Five beautiful men, all of them sporting athletic builds and shorts and friendly smiles.

They shot rapid language back and forth again, and Yves started to feel kind of silly sitting there while they all stood, so he rose.

One of them helped him up, grinning.

“Uh,” one of the three new guys said. “You are vacation?” His English was heavily accented. He pointed at the green band on Yves’s wrist.

“Yes,” Yves nodded, pointing back at the hotel behind them.

He bobbed his head. His hair was curlier than the rest, and his beard was more a goatee. He had a lovely smile.

“Sorry about…” he gestured to the disc. Then he looked around. “You are vacation alone?”

“It was last minute,” Yves said.

The guy shook his head. The others were still chatting around him, asking him questions. He laughed and snapped something back. The tone was clear: shut up, guys, I’m doing the best I can.

“I just got on a plane,” Yves said. Then, finally remembering his book, he held up a finger, and dug into his backpack. He pulled it out, and looked up the word for ‘unplanned.’ It took a while, but he got it and said it—probably in a horrid accent.

Goatee grinned at him. “Is good!”

Yves glanced down. The patch on his backpack. The rainbow.

He’d specifically asked the travel agent to make sure he wasn’t going somewhere hostile, but…

That was rewarded with a very large grin. “You swim?” The guy asked.

“Not yet,” Yves said, and unbidden, his hand went to the white cotton shirt he was wearing.

“You must!” One of the others said something to the goateed guy, and that set off another string of questions and answers. The others all turned to Yves grinning and laughing.

Yves took a deep breath, and opened the little book. It took him a while to find the words, but something about the way the five men asked seemed so earnest. They wanted him to join them in the water, to share the ocean with him, and…

He was pretty sure he mangled the accent, but hospital, recovery, operation and cancer seemed to do the trick. The five men paused.

“You cannot?” The man with the goatee said now, more subdued.

“No,” Yves said. “I can, but…” He flushed. Finally, he undid a couple of the buttons on the white shirt and opened it. The scar across his abdomen was still vividly bright. His fingers shook, and he couldn’t quite bring himself to look up at the five, beautiful—and completely unmarred—men.

There was silence for a moment, then the rapid-fire language ricocheted around him.

The man with the goatee touched his shoulder. “We swim,” he said again.

And they did. Yves left the white shirt by his bag and book and towel, and though every step of the way to the water he imagined the eyes of the others on the beach on him, the laughter and noise of the five men around him seemed to hold it at bay.

In the water, they took turns throwing each other high into the air. Yves treaded water near them, enjoying their laughter and play and feeling something inside him uncoil.

“You next?” The goateed guy said.

Yves’s eyes widened, but seeing those five faces grinning his way there was only one answer.