Edit: I’m dropping out of this theme for the month. The short reason is this: It’s hurting and excluding people I wanted to include in the first place, and that’s not okay. I thought I could patch-job. I can’t. The longer reason is: The original idea happened super-quickly. It jumped from brainstorming to being posted without any chance to look it over. Every suggestion I sent in I sent in with the umbrella term “queer” and references to either (a) genres, or (b) ideas a writer/reader would like to see more of/write. I don’t think I was clear enough when I sent in suggestions I absolutely meant queer that way. That’s on me. So the first graphic came out and was posted and used an incomplete acronym, and yeah, that was cringeworthy. It was posted and tagged before I’d ever seen it and I fired off a request for it to be fixed to the people organizing. And the fix isn’t enough. The specific identity questions don’t cover the full range. Yesterday I started writing some of the posts ahead of time, scheduling them to go live at 7:00a each morning. I wrote a few of them ahead of time—and especially day 5, where my answer was both a resounding no and an explanation of why making the correlation between romance and queer excludes aromantic queers. (I had a similar post outlined for the question about sex, and the question about straight characters, because, again, asexual people are queer, and straight isn’t the opposite of queer.) Anyway. I’m starting to ramble. I thought I could patch-job my way through the month, using every mention of queer to remind and reinforce that my queer is absolutely LGGBTQQIAAP2S+, but there’s enough hurt and dialog out there already to tell me no, I can’t. I’m sorry. My queer includes the whole umbrella, and those identities deserve more than a patch-job.

Hello! I’ve hooked arms with some lovely authors—Kathryn Sommerlot, J.P. Jackson, Kevin Klehr, and Nicki J. Markus—to brainstorm up a month of prompts for a Twitter hashtag about queer reading for Pride month.

Join in, tag it #PrideReads, and lets see if we can’t make noise for some awesome books (and shine a light on some awesome opportunities for books we wish we saw more of.) 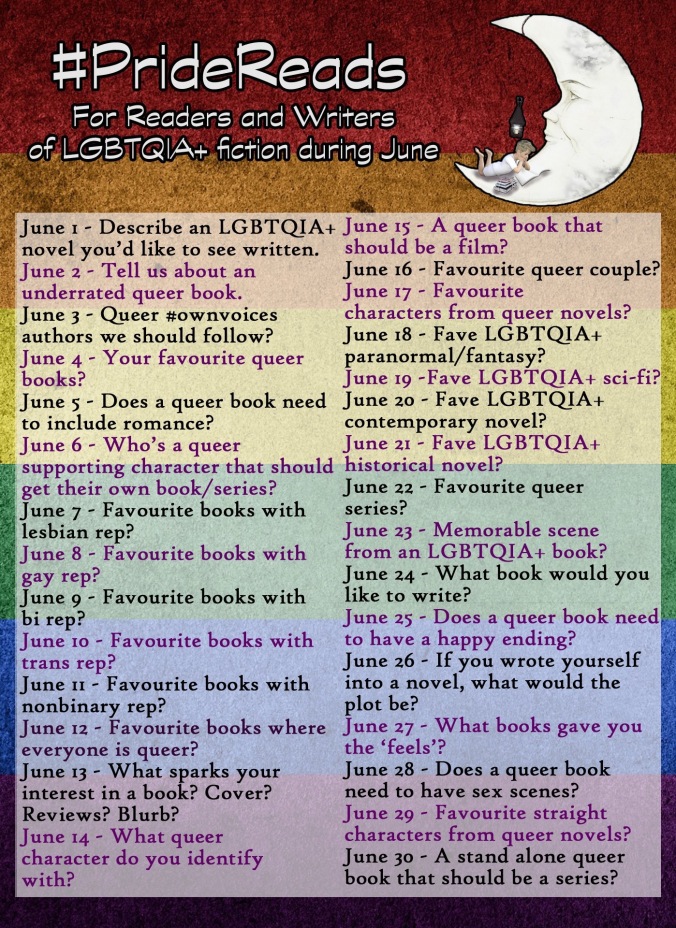 (Edit to add: I want to be extra-clear that when I say Queer or LGBTQIA+ I’m including Asexual, Aromantic, Pansexual, Nonbinary, Two-Spirit, and other identities that are far too often gatekept or missed by the queer community at large. The graphic here says queer or LGBTQIA+ and it’s important to me to make sure I’m clear that queer will always mean LGBTQIA2SP+ Etc.)