Today’s Friday Flash Fics is a rare dark story for me and comes from three places. One, recent events. Two, the book the man is holding in photo, which one of the members pointed out was a Lovecraft book. And Three, my utter hatred of the way people use the word ‘Traditional’ when they mean something very, very different. 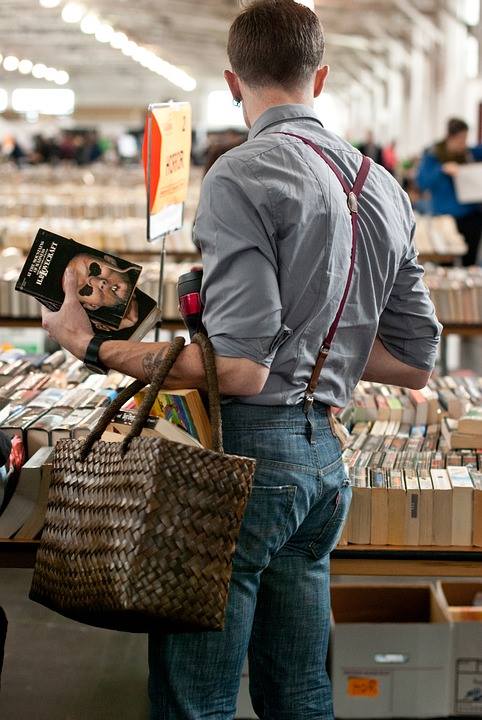 The man with the basket turned, looked at Hank, and then smiled a slow smile that made Hank think of hunger and thirst and the pleasantness that came after a long and enjoyable self-indulgence.

“I like to read,” he said. Suspenders stretched tight over wide shoulders and a broad chest, and the arm holding the basket—already full of books—filled the sleeve of his shirt admirably.

“Me too,” Hank said, holding up the two novels he’d found so far.

“What brings you to the city?”

Hank blinked, a little surprised. “What makes you think I don’t live here?”

“I don’t just read books,” the man said. Hank realized he had an accent, though it was slight and hard to place. “I read people. You’re not from here.” He picked up a couple of novels with twisted misshapen things on the cover, smiled, and popped them in his basket.

“Really?” Hank was just a bit unsettled. It was a good guess.

The man smiled again, and it had the same effect it had the first time. “You’re wearing a conference name-badge.”

Hank glanced down. Well, crap. There it was, his pass to the conference, hanging around his neck. At least it only had his first name on it. He tucked it into his shirt pocket.

“Those, too,” the man picked up a fantasy novel, eyed it, shook his head and put it back.

“Not that kind of fantasy.” He stressed the word.

Hank had to swallow. Lord, but this man was handsome. Nice chin. Just a shade of stubble. Okay, maybe there were a few too many hoops in one of his ears and there was a tattoo Hank couldn’t quite make out on his forearm, but the forearm itself..? Yes, please.

“So where’s your conference?” Another book picked up and returned.

“What’s it about?” This came with a brief moment of eye contact, and Hank wondered if he’d ever met someone with eyes as dark a blue as this man’s before. Midnight eyes.

“Ah.” The smile returned. “So this is you escaping the realities of politics?” He nodded, a gesture that seemed to encompass the whole open bookfair, and maybe himself as well.

“So this rally,” the man said. The accent was a little stronger now. “It gives you a hotel room?”

Hank had to swallow again. He nodded.

Beneath the shirt and suspenders was an expanse of skin that felt hot to the touch. Hank kissed him feverishly, and the man took hold of Hank’s neck in one hand, guiding him down. He went there willingly, and gladly.

Hank’s hands shook. This man was handsome and it had been a while since he’d had the opportunity. He knelt in front, but nearly lost his balance when his knee struck one of the books. It had fallen from the man’s basket when the man had tossed it aside.

Hank picked up the book. On the cover, a face made up from various body parts and strange shadows met his gaze, and he suppressed a shiver. He put it back in the basket.

Hearing his own words said back to him, and with a teasing lilt of the man’s strange accent brought Hank back to the task at hand. His fingers worked the man’s zipper.

“Not that kind of fantasy,” Hank said.

“What about family?” the man said.

“Your conference,” the man said. He reached down and took Hank’s right hand. “You take off your ring, but you rally around families?” He smiled again, that same, slow smile. “Or am I wrong?”

Hank hesitated, but the man made no move to stop what he was doing with his other hand. He pulled on the man’s jeans and underwear, exposing him. The man’s smile only grew.

“There we agree,” the man said. He pulled Hank up to his feet again, undoing Hank’s shirt and pulling it open. “Traditions. Rituals.”

“Right,” Hank was having a hard time concentrating. The man’s hands were warm and his fingers seemed to be everywhere at once. Undoing buttons and zippers and touching him. “Values.”

The man leaned in close, and then took Hank’s face in his hands. “Would you like to share my values? A tradition or two? Maybe a ritual?” His accent was thick now, and Hank had never been more turned on in his life.

The man smiled, and then something twisted. The fingers behind Hank’s neck seemed to lace together and grip tighter by the passing second. And there was a sound, a wet sound.

Hank tried to push back, but his hands seemed to sink into the man’s chest—slipping through the man’s skin and into something hot and liquid. He wanted to look down, but he couldn’t turn his face.

Hank opened his mouth to scream, but the man closed the final gap and pressed his own lips to Hank’s, and then a stream of slick, writhing things were filling his mouth and his throat and then, mercifully, his mind began to break.

John frowned out into the lecture hall, shaking his head. The rally had only been going one day and already they’d had two key speakers not show. Whatever happened to commitment to ideals? He checked his watch, trying to hide his annoyance. Okay, if Hank White wasn’t here to deliver his usual piece on Traditional Values in the next ten seconds, he’d find one of the alternates. He pulled out his phone, stepping back out into the hallway. He still had five minutes.

He bumped into someone, and forced himself not to snap out something rude. Appearances mattered.

“I’m sorry,” he managed, putting a gentle smile in place. “I should be more careful.”

“It’s fine. I wasn’t looking where I was going.” The speaker was a very attractive woman, John thought. He’d never seen eyes so dark a shade of blue before. “I was trying to find the family talk?”

The woman smiled at him. It was a very good smile, a slow smile that made John think of hunger and the meal that awaited them this evening and—he returned the smile in kind—how he had his evening free of any obligations. Especially his family.

“I’m glad to have found it,” the woman said, her eyes never leaving his. “I’m a big believer in traditional ways.”

John put his phone away. Maybe he’d lead this talk himself instead.