Here’s my entry for the September Flash Fiction Draw Challenge (the post for the original September draw is here). In case you didn’t know about this challenge, there’s a video here explaining (and showing the monthly draw), but the quick version is this: I use three suits from a deck of cards to randomly put together a genre (in this case: suspense), a location (in this case: a border crossing) and an object (in this case: a bag of money) and challenge anyone who wants to play to write something over the next week, with a maximum of 1,000 words.

I struggled hard this week—last Monday, we said goodbye to our husky, Coach, and to say that I’ve not been feeling inspired would be understating. My husband and I spent the week trying to adjust to not hearing him, not planning the day around him, and bumping into all the other ways he unexpectedly added colour, noise, schedule, love, and life to our day. So I’m not sure I succeeded here, but in the end, I did have something written, and here it is.

I’ve been toying with the idea of an “end of the world” story for a while, and my notion of a fairly fast-acting illness that spares only those with AB negative blood type that hits during the onset of an ice-storm is a story seed I’ve explored a wee bit in another flash fiction piece around here somewhere, too.

It occurred to me to write a piece from someone crossing the border the day things really kick into high gear, and then a different take on the bag of money occurred to me. 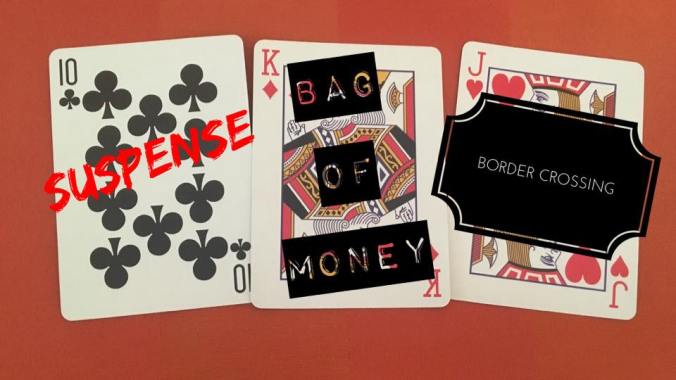 Gilles didn’t have to fake fatigue; nonchalance was harder. Finally making the front of the queue after the four cars in front of him were turned away, he lowered his window.

The icy winter air was a cold shock.

Gilles handed it over, and the border guard—thickly built with a mask covering half his face—took it with one gloved hand. He aimed a small flashlight at Gilles. Gilles flinched, blinking in the bright light.

“Where you coming from?”

“New York. The state, not the city.” He stressed that. It was important. “A conference. It got canceled.” Everything had. “I got a text a few hours ago. I’d almost made it all the way there, too.”

“This morning, crack of dawn.” Before.

The border guard made a small noise. Gilles was curling his fingers into a fist and forced himself to relax.

“The last person I spoke with before you was the guard at the border entry.”

The guard eyed him, flashlight still shining in Gilles’s face.

“Didn’t fill up your tank?”

The flashlight flicked to the fuel gage.

“You didn’t see or touch anyone while in the United States?”

The guard let out a puff of breath. “Smart. Pull into spot A.”

Despite the cold, a trickle of sweat gathered at his temple. “Okay.” His voice came out raw, and he hoped it would be attributed to relief, or just general border crossing anxiety.

Were they going to search his car? What if they denied entry? Where could he possibly go?

He parked, rolled up his window, and waited for perhaps five minutes before the guard came out of the post, and knocked on the glass.

Gilles obeyed, noticing a new guard had taken up the position at the border now, and had already turned a car away. It did a U-turn, heading off into the pelting snow.

The weather was getting worse.

The building held welcome warmth, and Gilles spared a brief glance around as the guard led him through a hallway. There were two guards in the building, in uniforms, masks and gloves. They eyed him in return.

The guard gestured to an open door. Gilles stepped through, and the guard followed him in, closing the door behind him.

Alone with the man, it struck Gilles he wasn’t just thickly built; he was tall, too.

The guard stared. “We have a checklist.”

That meant visible symptoms. Gilles swallowed, unzipping his jacket. By the time he’d gotten his shirt off, his hands shook so much he struggled with his belt.

For half a second, Gilles wondered if he’d be allowed the dignity of his underwear, but when he looked up, the man gave him a little shake of his head, so he pulled them off, and his shoes and socks.

“Turn around slowly. Raise both arms. Show your hands. Splay your fingers.” The instructions seemed arcane and endless, but Gilles obeyed.

After a long moment, the guard nodded. “Get dressed.”

Gilles fought the urge to dress quickly, instead taking care and working within the limits of his shattered nerves.

“Do you know your blood type?” It was the same monotone the guard used throughout their interaction, but something about the question made Gilles pause. He pulled his shirt over his head before answering.

“AB negative.” He’d had his appendix out when he was twenty.

The guard nodded. “Come with me while I search your car.”

The guard led, and Gilles tried to keep his gaze firmly locked on the big man, not looking at the other two guards as they passed through the building.

The guard nodded at them. Gilles would have missed it if he hadn’t been watching.

What did it mean?

Oh God. They’d turn him away. The borders would close completely. Even if they didn’t, he’d need gas, which would invalidate him crossing again. Risk of contagion.

Gilles shivered while the guard worked methodically through his car. Glovebox, back seats, under mats… everything was looked over. Then he popped the trunk.

From where Gilles stood he saw a small bag on top of his suitcase.

That’s not mine, he almost spoke, but clamped his mouth closed. Not possible. How could a bag end get there? He hadn’t stopped! The first time he’d left the car was just now. The only people around…

He remembered the nod.

Oh God. They were setting him up.

The guard unzipped the bag.

Canadian money was colorful. The reds, purples, and blues were obvious, even from where Gilles stood. It wasn’t entirely full, but there it was. A bag of money. In his trunk.

Should he protest? Gilles walked over to the trunk. What could he do?

The guard pointed into the trunk, and Gilles noticed there wasn’t just cash in the bag, but a few white envelopes, and a piece of paper.

Large letters at the top of the note read: SAY YES.

“This is everything? No one handled these bags but you?” The same monotone.

“Yes,” Gilles managed. He read the rest of the note.

PLEASE GET THESE TO OUR FAMILIES IF YOU CAN. Four envelopes. He’d seen four guards. The envelopes were addressed.

“You might be the last person getting through.” The guard zipped the bag closed. “You’re fine. Welcome back to Canada. You might want to get underway.”

The guard blinked away what looked like tears, then nodded. He glanced up, and Gilles saw the small camera, and realized they’d likely been recorded the entire time. The guard pointed. “Gate will rise when you get there.”

Gilles climbed back into the car.