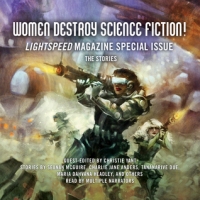 I listened to this story, from Women Destroy Science Fiction, as an audio while walking the dog and doing a few chores, and found myself considering PTSD, the notions of how we use tools—and people as tools—to get what we want, and how even when we’re trying to do a greater good, organizations or countries will often chew people up to get there, and simply look at how many lives were improved (by whatever measurement they are deciding “improved” might be) and call it victory.

And it was thoroughly, completely, drainingly depressing.

I shouldn’t put all that on this story, because what “Cuts Both Ways” manages to do is ground the point-of-view character so incredibly well that these thoughts the story inspired are still tempered by the man in question having chosen to do what he does (albeit without all the facts) and how he has found an anchor of sorts in the form of a woman he works with. It’s almost enough to feel hopeful (but not quite), and yet the man himself—who has been augmented and can “forecast” what is going on all around him via reading the electromagnetic impulses of minds—is not so completely broken to be utterly sad.

It’s a fine line to walk, and Clitheroe walks it well. The worldbuilding here is top-notch. Just the glimpses of the kind of technology this man has been altered with are enough to make me want to return to the same setting, even as I flinched over how he was being used, and the idea of someone capable of reading the zeitgeist of humanity around him so well as to more-or-less see the probable future was such a really unique and flavourful way to tell a story about trauma and survival.