The other night, Dan came into the living room and said, “Can we put up the Christmas Tree this weekend?”

The ornament for 2019 is in honour of our trip to San Francisco.

I was more than happy to agree, and while we didn’t sit down and think about it, I think our urge to put the tree up so much earlier than usual came from three places. One, the weather, which was been decidedly Christmassy for November; two, he just loves the way the room lights up when the tree is lit; three, last year we were both in a terrible funk about Christmas since we’d lost Coach and so it was marred as “the first without,” and this year we’re feeling cautiously optimistic about the season.

(Also, we went to a holiday party on Friday and they had their decorations up and sometimes I think once you’ve seen them, they sort of get in your head, no?)

But, about the tree, and our ornaments? There’s a story there.

If you’ve read Handmade Holidays, I was very much like Nick: living solo in a tiny bachelor apartment, working retail, and facing another Christmas flying solo. It wasn’t my first time ever, unlike Nick, but the first time since I’d gotten an apartment of my own so I got a floor-model tree on a deep discount on Christmas Eve, took it home on the bus (not recommended), dragged it into my apartment, opened the box, set it up, and…

…remembered I had no ornaments.

And a memorial gifted to us last year.

I had a box of candy canes, so that’s what ended up on the tree. It was, in no uncertain terms, sad looking. A friend gave me a cross-stitched ornament that year at our gathering of friends with nowhere to go party (often called “Christmas for Losers” or “Christmas for Misfit Toys”—just to drive it home how much semi-biography exists in Handmade Holidays).

Just like Nick, I bought a box of plain white ornaments for the next year, with tinsel and lights and a tree-topper. And as luck would have it, a friend gave me an ornament as a gift that year, too—a little mouse with a typewriter, in honour of a prof who told me my sample pieces were “trite” and “common”—and thus the tradition of nostalgia ornaments began.

Alvin and his record player. Together at last.

Every year when we decorate the tree, there are a few moments of surprise memory. This year? That was one of our Hawai’i ornaments, and a ceramic Café du Monde ornament neither of us actually remember getting. We turned on the music, enjoyed ourselves, and smirked at some ornaments (ah, Texas Longhorn Santa), sniffled at some others (any ornaments with Coach memories), and burst out laughing at a select few (the Alvin and the Chipmunk duet—as obnoxious as it is).

If you put up a tree, do you have any traditions around your ornaments? Theme tree or hodge-podge ornaments? 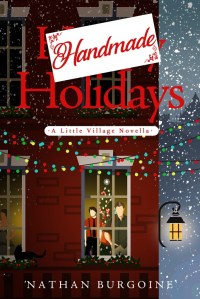 One thought on “Ornamental”