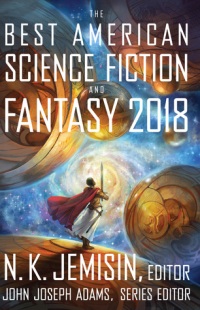 I love superheroes, as we all likely know by now. When I picked up The Best American Science Fiction and Fantasy 2018 when I was in San Francisco, I wasn’t expecting anything close to a superhero story, and then I bumped into “Destroy the City with Me Tonight” and it was kinda/sorta a superhero story and I was there.

Calling “Destroy” a superhero story isn’t actually fair. It’s about a woman diagnosed with a very particular illness—as it progresses, it stops her from being recognized, remembered, or even noticed, and also ties her to a specific city. It has that hazy feel of spec-fic between horror and sci-fi and contemporary fantasy, and it’s so well done. As time passes, her fingerprints fade, even her reflection stops appearing. Others like her with this illness tend to wear masks and outfits—the only way they can be recognized at all—and gain a kind of notoriety in various cities where they exist, alone and unnoticed by anyone when not wearing their masks. The disease does leave them incredibly tough to kill, and many of those with the disease use their “invisibility” to police those who do terrible things… hence my “superhero” button getting happily pressed.

The story hinges on so many little pieces I don’t want to spoil, but suffice it to say I really, really enjoyed this, and I loved the idea so much. The main character, her first encounter with another of her kind (face to face), how things get complicated, and the revelation of two ways out she’d never considered before? Yowza. So engrossing. Frankly, I’d love to see this one as a movie or graphic novel (or both, I’m greedy).