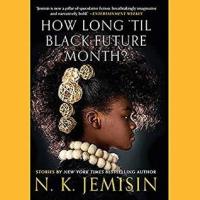 Okay, before I say anything else, I’m going to mention again how freaking well the stories are performed for this audiobook. How Long ‘Til Black Future Month? is fast becoming a source for new audio performers to follow like mad, and I love it when that happens—it leads to finding new authors to enjoy. The sheer amount of characterization the narrator puts into performing the dialog and prose here was off-the-charts awesome. I could feel Emmaline’s every frustration and fear, and that was fantastic.

The story is (recently) historically set, in the Jim Crow South, where Emmaline, a single mother who is gifted with premonition in the form of dreams and also other earthly powers with plant and craft, is just trying to teach her three children to make their way through the world with the goal of survival. She does not believe the world will change for the better (and her dreams certainly seem to align with that idea). He keeps her daughter and two sons close, and tries to teach them all the ways in which white people will trick them, hurt them, blame them, or otherwise hate them for no reason, and the best courses to avoiding conflict. It’s heartbreaking, but it’s practical.

When a fae-like creature comes to Emmaline’s home to offer an exchange: one of her children for safety for her and her other two children, Emmaline refuses flat out. But she’s not the only one with gifts, and not the only one willing to make a deal to get to a future safely. What unfolds is a brilliantly told tale about hope, vision, and sacrifice that manages to pull no punches about reality while still offering a sense of accomplishment and forward motion. And the scenes in the “dreaming” were just magical.