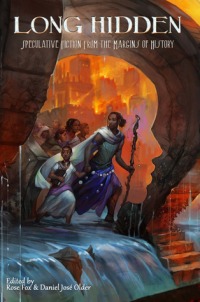 I think one of the things I enjoyed the most about the tales in Long Hidden: Speculative Fiction from the Margins of History is how often the speculative part of the story exists outside of the marginalized voice characters. This isn’t a book where the othered is the magic, but rather the othered exists—as it always has—alongside magic. It’s not always the case, but “The Heart and the Feather” is an excellent example of what I mean.

The story is told through the voice of a young woman with congenital hypertrichosis, which she has inherited from her father, and who lives in Innsbruck, Austria in 1589 on the largesse of an Archduke who more-or-less keeps her family as a sort of “clever oddity.” Her father’s past (and her own) are explored to explain how and where they came to be, and then the real problem is presented: something is killing children, and the common folk have decided it is a werewolf.

The daughter takes it upon herself to act, for she knows full well that her father and siblings are an easy scapegoat, and therein unfolds the tale. She is a girl who has been forced to take the role of as elegant a woman as possible in her situation to avoid exactly the sort of association now passing around as rumour, and yet she is trying for the first time in her life to be beastly enough to track down the real creature killing children. The dichotomy is delicately delivered, and realities of being “different” are drawn clearly.