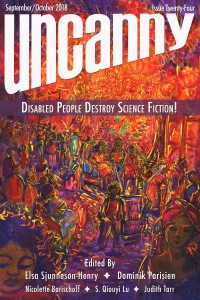 Oh wow, this story. First, I need to mention that I had multiple visceral reactions to this story, which involves a woman with a disability that involves her bones randomly teleporting out of her body and existing elsewhere (like, in orbit of Mars elsewhere), who uses a particularly modified Faraday cage and a process she calls “singing” to bring them back. The descriptions of these bones exiting her body (her jaw, at one point, her knee another) had me reeling from the page, despite the lack of gruesome detail. My mind just sort of filled in the shudder-inducing stuff, and I had to keep putting the story down. That is by no means a complaint nor a criticism, but it meant this was the story I took the longest to get through in Disabled People Destroy Science Fiction.

Izze is a scientist, and both she and her friend, Severin, are in cages both literal and figurative thanks to their disabilities: Severin, who seems to age forward and backward depending on stressors, and Izze with her teleporting bones. Izze fights for her independence, to get enough cash to avoid having to sign up for studies, and teaches while she works as much as possible to figure out solutions for herself (and Severin). It’s all familiar, despite the fantastical concepts of their illnesses, and Izze’s frustrations and pains are so clear and blunt. (And the elevators are always goddamn broken.)

The journey in this tale isn’t so much toward freedoms as it is toward solutions, and that difference is something I’ve noticed over and over in these stories—not cures, but rather accommodations or freedoms or accessibilities. And while I can’t get the image of Izze’s bones flinching their way out of her body, the story itself would have sat with me a long while thereafter regardless.