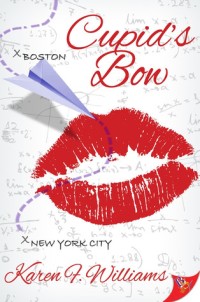 If I’m honest, my favourite thing about romance is always the meet-cutes. Two people having a connection spark is where I generally find myself hopping aboard in a romance, and my favourite of the favourite are the awkward meet-cutes or the borderline meet-disasters, and “Cupid’s Bow” is a great example of this. We meet Kay at a bar, where she has attended a writing conference (she’s a novelist and an English teacher), and she spies Ann, and is attracted, and takes a swing—and a miss!

Ann is there to take part in some lesbian speed dating, and she’s a math professor, and Kay’s romance novelist pick-up lines fall completely flat, and her own mentions of her professional life have Kay wincing in return: math? Math and romance don’t go together, at all. (I have to say, as an English Lit student, former-bookseller, current romance and spec-fic writer who is married to a fella with a math degree, their “communication” was hysterical in this regard). The two, however, have a moment or two, spark a few times, and then find a thread they find enjoyable to discuss from both their points of view: the rule of three.

Math, romance, and a growing connection make this short novella a joy to read. The banter, and the little verbal jousts and one-upmanship that the two woman make start off a little snarky, but is soon playful, and then flirtatious. And as “the rule of three” moves on to “the golden ratio” and to “cupid’s bow” I was rooting for these two and grinning my way through to the end.

And as an added bonus, I was lucky enough to have the opportunity to ask the author where the story came from:

When I sat down to begin Cupid’s Bow, I’d been asked to write a short romance with a “conference theme.”  What came to mind was a vision of two women meeting in the bar of a Boston hotel on a snowy night in February. But who were they, and why were they there?

Around that same time, I had an interesting phone conversation with a writer-friend about the notion of things always happening in threes, and why the rule of three works so well in literature. The discussion digressed and ended on the subject of the golden mean—a mathematical concept that manifests in art and nature (think of the spirals of a seashell), thought by many to repeat itself throughout the universe.

All these ideas came together, and suddenly I had a story plot for an opposites-attract romance: an English teacher/novelist from New York is attending a writer’s conference. The other woman, a math professor living in Boston, is at the hotel awaiting lesbian speed-dating held in a downstairs conference room.

If you’re already yawning, the story won’t interest you. Nor would my company if we met at a social gathering. And you know, that’s how I think of the author-reader relationship – two strangers meeting at the party of a mutual friend. You’re there with a drink in your hand, unable to find any familiar faces, and decide to shoot the breeze with a person standing next to you.  “Some weather we’re having, huh?” or “How do you know so-and-so?”

Sometimes those conversations reach a dead-end in record speed, and with a growing awkwardness you politely excuse yourself, glad for the opportunity to shake the ice cubes in that empty glass and gesture toward the bar. “I think I’ll go get another drink. It was great meeting you.” I’m laughing here, but it’s true. We’ve all been there. But then other times, that connection with a new acquaintance, like the connection between an author and a reader, is instant and wonderful. There’s nothing like that feeling of simpatico, a meeting of minds, where talk about the weather easily leads to all sorts of topics: climate change, polar bears, fireflies, sustainable farming, the tomatoes in your backyard garden…how beautiful the moon was last night. And rather than parting ways, you head to the bar together, hoping to find a quiet corner where you can sit and talk some more.

So! If you think you might enjoy reading my work, or having that drink (haha), meet me at the bar in Cupid’s Bow. We’ll eavesdrop on the conversation between writer, Kay Westcott, and Professor Ann Ward. But don’t expect things to go smoothly. The writer’s humorous flirtations do more to irritate than impress the math professor. Still, the chemistry is undeniable and sets the stage for an exchange of quirky facts, fun phenomena and, of course, irresistible attraction.

Coyote Blues, Ms. Williams’ new shape-shifter romance, comes out this June. To find out more, visit her at www.karenfwilliams.com