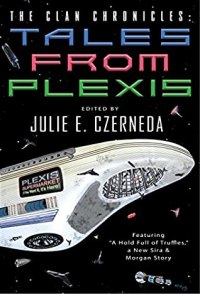 Every trip to the space-supermarket in The Clan Chronicles: Tales from Plexis is such an unknown quantity at the start. There are a few recurring themes in the tales, I think due to the setting, but one that plays out often is “not as they appear.” It’s an interstellar place with the motto of “If you want it, it’s here!” and that leaves itself wide open to some wide interpretations, and to some shady-type characters. So, at first, I was lulled a bit into complacency when we got a tale around Ansel, a human who works the finances and other operations at the multi-species restaurant “Claws & Jaws” (which features in passing quite often).

Ansel is a lovely fellow, a peace-maker, a calmer-of-angry-patrons, and kind of an adorable little stuffy guy. When his smoothing of an irate customer leads to tickets to an alien concert, he’s pleased to go, and more than pleased by the performance of the singer in place. It turns out Ansel is a lover of music, and connects with the singer, starting off a cute little relationship that—because this is Plexis—ends up taking a turn for the unexpected, with revelations leaving Ansel unsure and unclear of what to do.

A character piece, “A Song of Plexis,” doesn’t thrum with danger or have high-stakes, and I kind of enjoyed it all the more for the mostly-gentle pace and tone of the piece. There’s more going on, yes, and Ansel does get in a bit over his head, but it never feels like there’s a looming disaster, and it’s another welcome pause-to-catch-breath in the overall cadence of the anthology, which has more than its share of danger. There’s even a last little tug on the heartstrings.