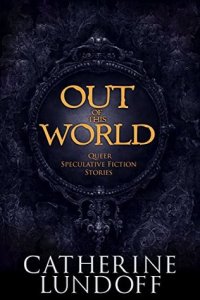 Today’s entry in my journey through Catherine Lundoff’s Out of this World: Queer Speculative Fiction Stories is one of my favourite of the collection. We follow a young sex-worker in a “House of Bliss” who is with an influential client (not that he’s supposed to know that). The man he’s with is very close to the King, and is more than a little infatuated with this worker, and we’re watching him read some poetry he’s written while living inside the head of his guy and I have to admit, I was chuckling my butt off at his train-of-thought as he did his best to force a façade of arousal in the face of bad poetry. Then the influential client takes a swig of wine and promptly chokes to death on some poison.

What follows is another example of Lundoff’s ability to world-build in short fiction at the intersection of perfect amounts and perfect pacing thereof. We learn each little detail of how the young man came to work here, how he was trained, how magic works in this world, how he’s in way, way over his head, and how he’s very likely not to make it much longer, what with likely being blamed for murdering the influential client in question. The owner of the House of Bliss gets involved, as does the witch who lives there, and between the three characters, a lot of manipulation and revelation, and a healthy dose of frightening magic, the murder is solved.

I think I like my fantasy stories best when they’re an admixture of another genre as well (in this case, a murder mystery) which is why “At Mother Laurie’s House of Bliss” resonated so well with me as a reader. I also really have a thing for characters who have little-to-no recourse finding the wiggle room with what they’ve got, and this story has that, too.

Once again, I got to ask Catherine Lundoff where the notion for this one came from, and it turns out it was crafted for a call:

Editor Lee Martindale was editing an anthology of fantasy tales about sex workers (nonerotic) and I was thinking about closed room mysteries and this was the result! I always meant to go back and do more with this world and these characters.

I second returning to this world, too!

One thought on “Short Stories 366:230 — “At Mother Laurie’s House of Bliss,” by Catherine Lundoff”