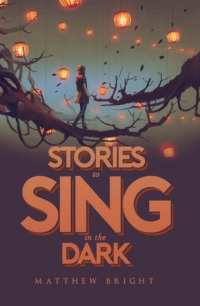 I’m cheating just a little tucking this story into October, but in fairness, I’m not a fan of horror but I do love a good ghost story and this story has ghosts in a few senses of the word. It’s from Matthew Bright’s wonderful Stories to Sing in the Dark, and it’s the last story before the novella that closes out the collection.

It’s a speculative fiction piece set in a nebulously futuristic Manchester, on Canal Street, where the queer community gets together, and it features a particular bar on a particular night. The night in question is the last—the bar is set to be destroyed—and so the drag queens (and one in particular) put on one final show, for all the customers.

Some of whom arrive from the beyond.

Narratively, there’s a lovely set of tales being told here (and at least one that’s deeply sorrowful), and the counterpoint of the story’s futuristic traces (drag can be accomplished now with personally worn VR units that project the look you want, for example) adds a layer of slight ambiguity. When the drag queens talk about the ghosts in the audience, are they being literal, or..?

This is a story about a final hurrah, a last performance, and the way an entire era of a particular culture can be bound to a place, if not a time. The title makes the story seem sadder than maybe it is—again, there’s ambiguity here—but overall, there’s just enough shiver to this one to satisfy on both the spec-fic front and the queer front.