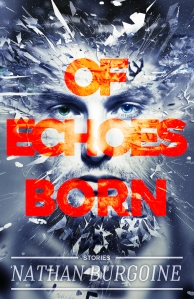 Available now in e-book and print from Bold Strokes Books, and from your e-tailer and retailer of choice. Check Indiebound for a local brick and mortar near you, or try Bookshop.org or Books2Read for your options. Edited by Jerry L. Wheeler, and cover art by Inkspiral Design.

The thing is? The ‘Rear Admiral,’ like everything else about Matteo Rossi—a.k.a. the former Dom Masters—is big. A wine tasting party, some snooty friends, and a brief interlude on a balcony later, and Russ and Matt have an actual conversation. A conversation that opens the door to something bigger.

Can one average nurse and his way-more-than-average crush make it work? Russ figures there’s one way to find out: go big or go home.

Available now in e-book. Check Books2Read for your options. Edited by Jerry L. Wheeler, and cover art by Inkspiral Design.

Note: the six short stories listed in bold are included in my first collection Of Echoes Born (above), from Bold Strokes Books, alongside six new, previously unpublished stories.