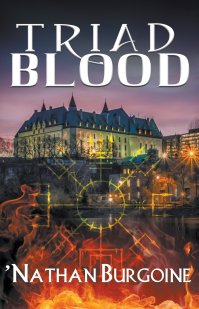 The law of three is unbroken: three vampires form a coterie, three demons make a pack, and three wizards are a coven. That is how it has always been, and how it was always to be.

But Luc, Anders, and Curtis—vampire, demon, and wizard—have cheated tradition. Their bond is not coterie, pack, or coven, but something else. Thrust into the supernatural politics ruling Ottawa from behind the shadows, they face Renard, a powerful vampire who harbors deadly secrets of his own and wishes to end their threat. The enemy they know conjures fire and death at every turn. The enemies they don’t know are worse.

Blood, soul, and magic gave them freedom. Now they need to survive it.

Available now in paperback and ebook from Bold Strokes Books. Check Indiebound for your local brick and mortar, or via Bookshop.org, or online at your e-tailer of choice via Books2Read. If you’re in Toronto, check out Glad Day Book Shop. Edited by Jerry L. Wheeler, cover art by Jeanine Henning. 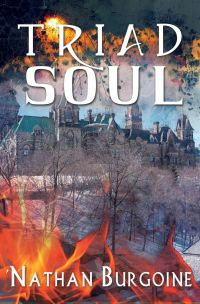 The law of three is everything: three vampires for a coterie, three demons for a pack, and three wizards for a coven. Those alone or in pairs are vulnerable to the rest. Luc, Anders, and Curtis—vampire, demon, and wizard—sidestepped tradition by binding themselves together.

When something starts brutally killing demons in Ottawa, the three find themselves once again moving among the powers who rule the city from the shadows—this time working with them to try to stop the killings before chaos and blood rule the streets.

Hunting a killer who seems to leave no trace behind, the triad are forced to work with allies they don’t dare trust, powers they barely understand, and for the good of those they already know to be corrupt.

They have the power of blood, soul, and magic. But they have to survive to keep it.

Available now in paperback and ebook from Bold Strokes Books, and as always try Indiebound to see if your local brick-and-mortar has it in stock, or through Bookshop.org, or visit your local retailer or e-tailer of choice via Books2Read. Edited by Jerry L. Wheeler, cover art by Melody Pond.