It’s been a rough week. My mother broke her foot, my head decided a multi-day headache was in order, and on top of that it turns out that I need very little nudging to decide to declare a “brownie day.” Headache? Brownie Day. Struggle with a short story? Brownie Day. Hangnail? Brownie Day. 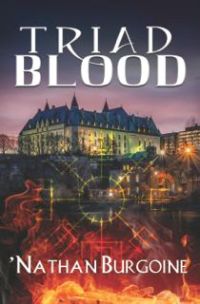 Click here to enter the giveaway for Triad Blood.

I have two giveaways underway at the moment on Goodreads. The first is for a copy of Men in Love, edited by Jerry L. Wheeler, which just released. The second is for Triad Blood, which, oh, hey, that’s my second novel and it’s not even out yet!

Click here to enter the giveaway for Men in Love.

If you want to enter the giveaways, just click on the covers here and you’ll end up on the Goodreads giveaway pages. I did have to limit it to Canada and the U.S. thanks to postage prices (I wish I could do giveaways of e-copies, too, but Goodreads doesn’t allow that).

Obviously, I hope giveaways attract attention, and in the past they’ve been a good way to generate reviews. Which is already happening for Triad Blood (and “Three,” too, which surprised me!) thanks to NetGalley. My first review of both has been more-or-less a positive one, so I count myself lucky. Fingers crossed these guys find the readers they’re looking for.

Yet Another Reminder to Respond to the Launch RSVP!

Speaking of Triad Blood… The launch of Triad Blood event posted is over on Facebook, right here. It will be at After Stonewall, here in Ottawa, on Thursday the 12th of May. That’s less than a month from now and that’s terrifying! More details are available through the event link. If you’d like to come, make sure you RSVP, as the owner has to watch for capacity laws.

I’m likely to have a silly game ready by then, too. Yep. That’s right. A silly game.

Let’s just move on this week, shall we? No need for messy word counts. Nope. Ooh! A brownie.

I’ve been working on the second Village story again, which doesn’t have a home or even a plan for a home, so I need to step back and work on a short piece to submit somewhere before the month is over.

Open Calls I Know About (and find tempting)…

Don’t forget to check the Lambda Literary site for more calls, as well as the Queer Sci-Fi calls for submission page (always a trove!)