Found in Wilde Stories 2017, “Das Steingeschöpf” has so many balls in the air, juggled effortlessly, that it’s going to be forever bookmarked in my mind for when people ask me “Isn’t short fiction limiting?”

Anderson’s story handles an alternate world post-WWI historical setting (as WWII is about ready to explode), a queer main character where their queerness is not the narrative in and of itself, magical realism, gargoyles, world-building, style, and a complete narrative arc all with just sixteen pages.

Now, without spoiling anything from the tale, it’s about a very particular sort of stone restorationist—one who has the ability to work Queckstein, a particular kind of stone that can absorb life and memory and gives birth to living gargoyles. This young man is barely out of his training, and comes face to face with a piece of living art, and an opportunity to work with—and repair—a gargoyle crafted by one of the greats. It may be beyond his skill, however, and he’s already fighting the stigmas of being one of Germany’s hated peoples. But is the chance too great a temptation?

Wilde Stories 2017 has so many wonderful tales in it, I’m sure I’ll revisit the anthology again with my weekly mini-reviews, but in and of itself, “Das Steingesdchöpf,” makes this year’s anthology a must read. 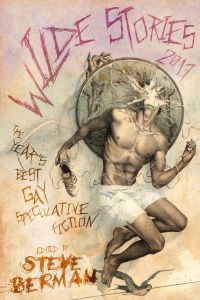 A man named Turing visits a museum to see its rarest automata; during the Plague Years, three artists seeking to express a voice for their friends lost to AIDS unwittingly create life; a far-future restaurant offers patrons questionable cuisine; an immortal assassin may be one step closer to a paranoid king, despite his unspeakable precautions; the very existence of a mysterious and ancient golden android challenges a clergyman’s faith…

Wilde Stories showcases the previous year’s best offerings in gay short fantasy, science-fiction, and horror. This edition includes award-winning and critically acclaimed authors Sam J. Miller, A. Merc Rustad, A.C. Wise, Martin Pousson, and more. The stories in this, the latest volume in this annual series, challenges the definition of life and infamy, existence and reputation, were chosen by Steve Berman, the premier editor of queer speculative fiction for more than a decade. Contains the World Fantasy Award-winning story by G.V. Anderson!

Available from Lethe Press, and wherever quality LGBT fiction is sold.